Designed with a pair of the latest NXP MRF1K50H LDMOS transistors that are each capable of 1.5 kW and run up to 2000W easily, providing plenty of headroom for lowest IMD and spurious output.

It has a few first ever features built in:

PG XL is the only fully SO2R capable amplifier. It has 70dB nominal isolation between exciter inputs.
A single FLEX-6700 and Power Genius XL comprises a complete SO2R station at half the cost of competing solutions.

As expected PG XL is well protected from high SWR, with ultra fast SWR circuit, inhibiting RF module in less then 1uS.

Multiple band selection methods supported including CAT, CI-V, BCD band decode and Ethernet. When connected to a FLEX-6000 transceiver, band selection is fully automated through the Ethernet connection. Even T/R control is provided over the Ethernet connection to further minimize wiring. In addition, all amplifier status reporting including power levels, fault conditions and resets are reported to the FLEX-6000 Signature Series transceiver using the SmartSDR API. SmartSDR client interfaces such as SmartSDR for Windows, Maestro and others can display power levels and other reported statuses.

For remote operation with other HF radio exciters, an Ethernet API or friendly Windows and Android applications can control the PowerGenius XL.

We build in a large touch screen display to enable easy future upgrades, as we plan to have constant improvement and add new funcionalities like direct control of Tuner Genius, new functions for integration with radios or peripherals etc.

PG XL is designed by the 4O3A R&D team, one of the most experienced in professional broadcast industry as well as contesting.

Most Amateur RF amplifiers provide output filtering to maintain spectral purity regulatory compliance by suppressing emissions which can occur outside the desired operating frequency. Most are low pass designs that deal effectively with undesirable harmonic by-products that can occur for a variety of reasons during the amplification process. Two side-effects of applying low pass filters to the output of high power amplifiers is heat and some of the filtered RF energy remains in the final amplification stage causing additional non-linearities due to the extra harmonic energy electrically “trapped” in the output stage.

The PGXL provides additional sets of filters, one for each ham band, that directs unwanted harmonic energy into an internal dummy load, called the “Harmonic Load.” This is a common architecture in broadcast transmitters and removes unwanted energy from the output stage, improving linearity and thermal management and allowing the transmitter to achieve the same fundamental power output with less device peak Drain Voltage.

The Harmonic Load in PGXL is a 400-Watt resistive dummy load, mounted on a dedicated heat sink, with a discrete temperature sensor and fan controller. 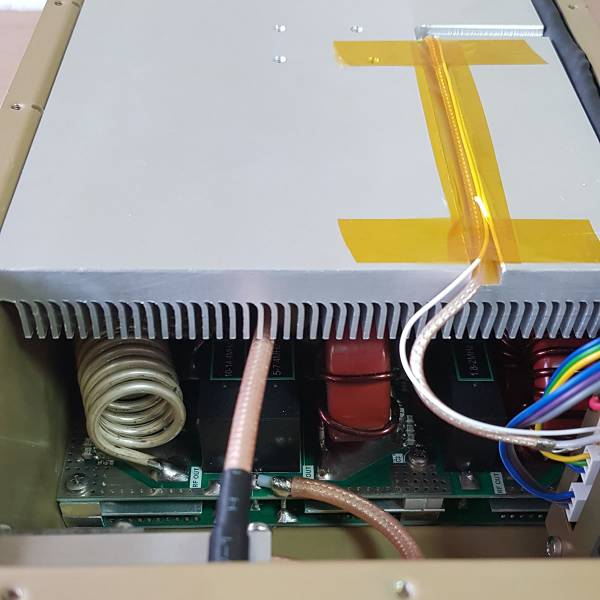 The PGXL is air-cooled with four fans to manage temperature in three distinct and independent zones internal to the amp.The Power Supply is a self-contained module that monitors related component temperatures and adjusts the speed of its cooling fan(s) accordingly.
The Harmonic Load and Filter fan will transition to maximum speed when the at 65 °C (149 °F).
The Power Amplifier (PA) compartment holds three fans that switch to maximum speed when the PA Heatsink temperature reaches 75 °C (167 °F)The three zones are managed by independent fan sets that have their fan speeds dynamically adjusted according to the temperature measured in the area they are intended to cool.The PGXL provides you with the option to select from three cooling strategies, “Normal,” “Contest” and “Broadcast.” 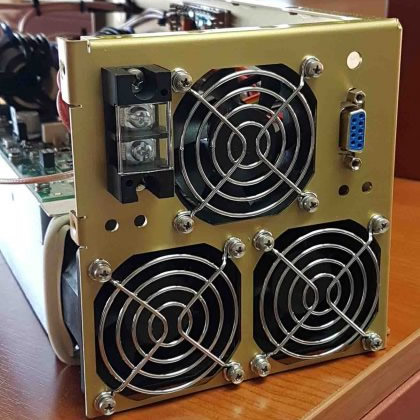 “Contest” employs a more aggressive strategy and has the fan speeds increase in anticipation of continued heavy use, such as might be encountered in a contest situation.

“Broadcast” locks all fans on maximum speeds at all times the amplifier is in “Operate” mode.

Independent of cooling strategy, the unit will always run the cooling fans at speeds necessary to protect the amplifier. If the final transistors are measured to be at a temperature above 85 °C (185 °F), the PGXL’s thermal protection circuit will engage to prevent amplification altogether (see warning lights and alarms). At 110 °C (230 °F), measured at the Harmonic Load, the thermal protection circuit is enabled until the temperature drops below those thresholds.

What is MEffA? And when to use MEffA, Mode AB, or Mode AAB.
MEffA was invented by 4O3A himself and stands for (Maximum Efficiency Algorithm) and this feature noticeably increases the efficiency of the amplifier when processing constant level tones or non-AM signals, such as CW, RTTY, FM or FT8 type signals. It works by decreasing the drain Voltage on the amplifier devices, requiring more drive, which moves the amplifier closer to a higher efficiency “Class C” operation. It is only available in “AB” mode.

It is not applicable to amplify signals with a varying amplitude, such as SSB, AM, or FT8. These modulation modes require the use of Mode “AAB” which provides maximum linearity, but at a lower efficiency than Mode “AB” because you are operating closer to operating the amplifier at Class “A”.

Important Note: Though the MEffA box may be checked in the PGXL Windows App, it is active only when the amplifier is in Mode “AB” and has no effect in Mode “AAB”. You can operate in Mode “AB” without MEffA enabled, which still offers mild improvements in amplifier efficiency, especially for constant level signals, relative to maximum amplification linearity.

Adjustment of MEffA at a desired power level requires a “tuning” procedure.

Key the amplifier with a “Tune” or drive signal, to establish the desired output.
Unkey the amplifier then re-key. (You may note that the amplifier drops the Drain Voltage and see the corresponding drop in output level). This is MEffA working.
Increase drive to re-establish the desired output level. Then repeat the process (starting with step 2 until the desired output power is achieved for every time keyed.
You are now ready to operate.
If you don’t want to go through this process, you can leave MEffA off (box unchecked in the PGXL Windows application) and use a fixed drive level that should always correspond to a fixed power output for a given band.

Production of PGXL is organized to provide highest quality. Once assembled, sub parts are calibrated and tested with dedicated software.
Before shipping, every single PGXL is passing rigorous test of robustness, running full power with very high duty cycle, on all band for about half hour in total.
All this tests are automated and results are stored. 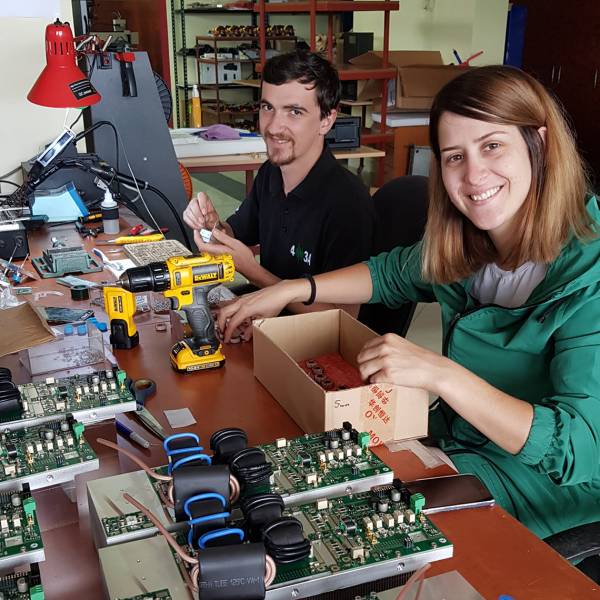 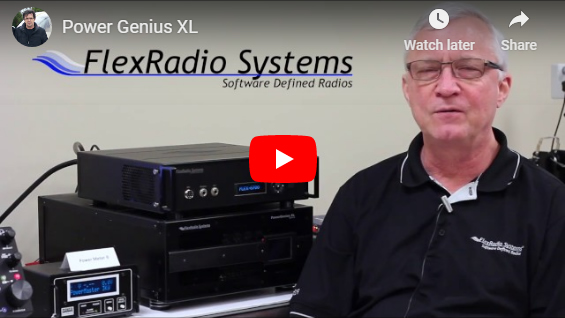 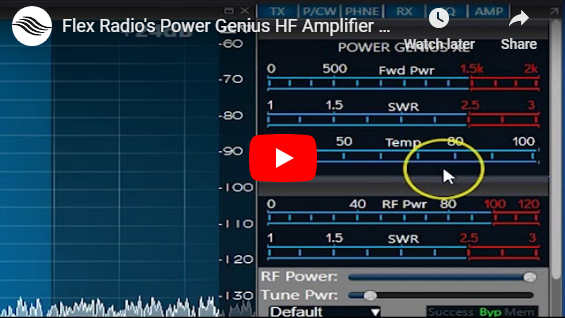 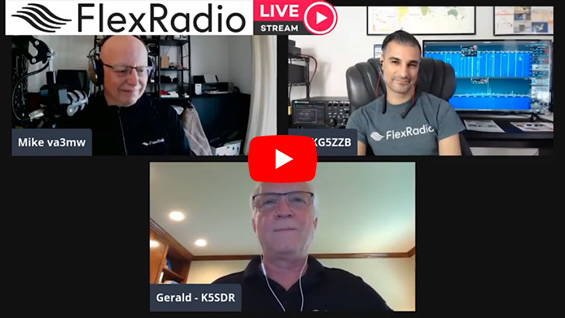 PG XL is designed to be mechanically robust. It is certainly the most robust amplifier on the market today.

The front panel is made from die-casted aluminum and features a handle making it very practical for moving and manipulating. Some electronics as well as the display are built in to the handle.

The back panel is also made from die-casted aluminum for extra protection and stability. Extensions on the back panel corners protect the amplifier as well as the connectors from direct hits in case of a fall or rough handling.

Suitable as carry on laguage

The size was carefully designed make the amplifier suitable as carry on laguage on an airplane.

Each separate module satisfies strict standards when it comes to RF shielding. 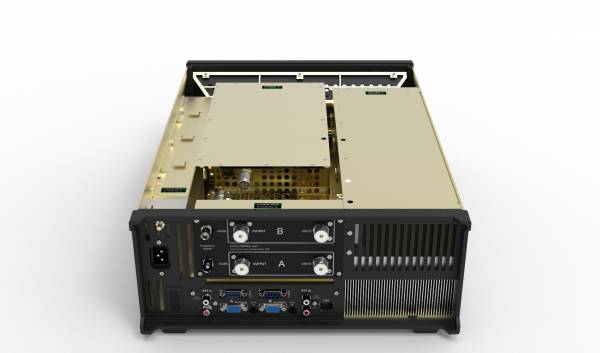 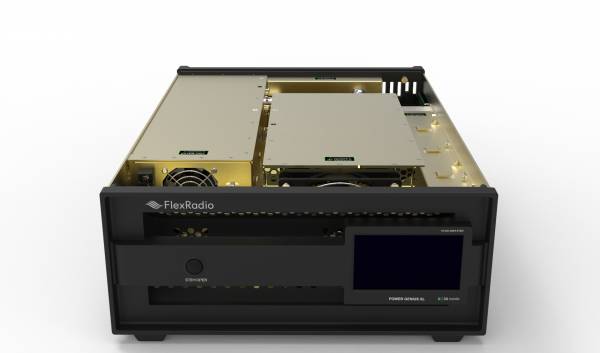 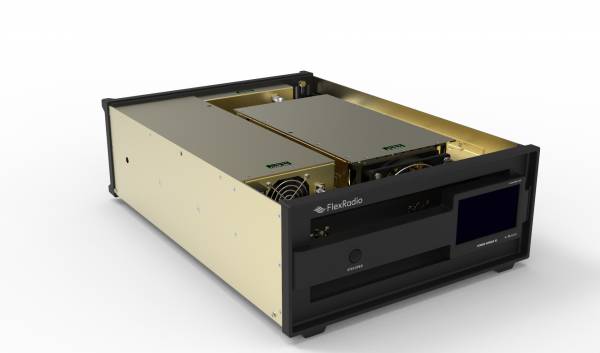